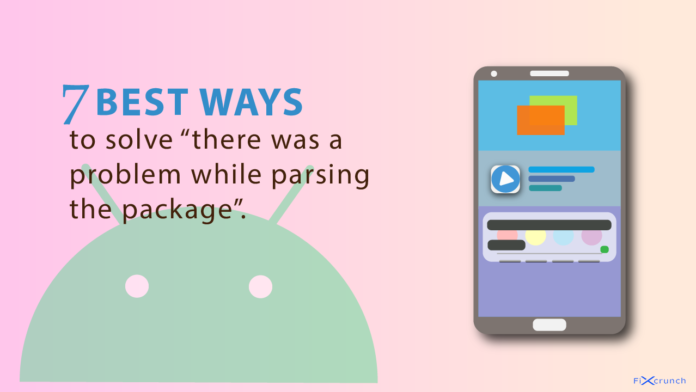 Android technology has changed our lives so much. There is an app available for almost everything. And everyday developers are bringing more and more changes to the system. But with a great number of apps, there are also many problems and errors. When I was installing an app on my android device. A pop-up window appeared. A message on it “there was a problem parsing the package“. I was like “NOW WHAT THE HELL IS THIS”. I tried to install the app, but the result was the same.

After this, I downloaded kinemaster pro version unlocked from Google and tried to install that but guess what? “there was a Problem Parsing the Package“. I cursed my phone and thought it has something to do with my poor LG G2. I did a bit of research on the internet by visiting various forms such as the XDA Developers. In addition to that, I also watched YouTube videos, and I found out I was wrong. My phone was Ok the problem was in the app. Not only this, but I also found out that there are many reasons behind this annoying error message which appears as a creepy walker on your screen and says “there was a problem parsing the package”.

Understanding There was a Problem Parsing the Package issue

Before we solve the problem, let me tell you what causes this error to appear. The following are the main reasons due to which the error message appears.

Sometimes It also happens to me when I am downloading a file I not able to download it completely. This is because of either power breakdown or my unstable internet connection. Though an Android app needs all the data to work properly. Therefore during the installation of the incompletely downloaded file, we usually get the error message.

Not suitable for current OS version:

Sometimes the file we download is not suitable for our OS version. This is because the coding of the app requires an advanced version of the operating system. Due to this, the installer is not able to install the app and as a result, you get the message “there was a problem parsing the package“. This has happened to me a number of times. I laughed on myself when I was installing The walking dead season 3 on android 4.2.

The android technology cares a lot about its users. They have shaped the technology in such a way that it prevents the loss of user data. Keeping the user’s security in mind every Android smartphone is set to install apps only downloaded from the official store. This is because these apps are scanned and safe from any creepy virus or trap. The apps which you download outside of the play store may not install on your device because of the security issues and as a result, you face the most annoying error message.

Sometimes due to a virus attack or lord knows why the files of an app get corrupted due to which an app loses some of its data. And due to loss of that data, we say the file is corrupted. Installing a corrupted file on your device will get you nothing but an error saying “there was a Problem Parsing the Package”.

Changes to the manifest file:

Sometimes we play with the manifest files for different tweaks. This may lead to the disturbance in the coding of an app and we will not be able to install it anymore.

The following methods explained in this article may help you. It totally depends upon whatever case you have but still, I suggest you have a look at every solution mentioned here.

If you are facing the problem due to security issues then you will solve the problem by going through the following procedure. If your phone running on Android Oreo or Pie follow

And you are good to install apps without getting no more error.

I don’t know why but enabling the USB debugging has mysteriously solved the problem for many users. To enable USB debugging mode first you will have to unlock the developers’ option in your phone.

Now you are good to go install the application without getting no more error. If not solved follow below steps.

As mentioned earlier sometimes the antivirus apps try to block third-party installations to keep the phone safe. If you trust the source where you downloaded the file then it is OK to disable your antivirus for a while. Doing so will increase the chances of installation of your desired app.

This is simple always check the size of your downloaded file and compare it with the original file size. If the downloaded size is less than the original file it means some files are missing. Due to lack of these files, you may get the message “there was a problem parsing the package”. Therefore always download complete files of the desired app.

Sometimes the play-store saves too many data in the form of cookies and cache due to which it cannot add more data. Now because of this problem, you may get an error of parsing the package. To avoid this error always clear your play-store cache and cookies.

Now trying to install that application which you have got the error or not.

Outdated OS can also be a pain in the Android. Make sure you check the requirements of the downloaded file. If it requires an OS that is higher than your current version try to upgrade your OS if available. If not you can always install custom ROM. These ROMs are easily available for every phone and you don’t have to wait for the factory updates.

The Error message “there was a problem parsing the package” is quite annoying. But I told you the possibilities due to which you face this error. Also, there are different solutions to the problem it totally depends upon the case. Try applying the above-mentioned steps and I hope your problem will be solved. If you are still facing this problem then you may have to upgrade your phone, unfortunately. Anyways If you have any other problem feel free to ask in the comment section below also do not forget to share this article with your friends to help them get rid of this problem.

What is there was a problem parsing the package?

This problem caused for the damaged, not supported application at the installation time on Android devices.

Why there was a problem parsing the package?

How do I fix there is a problem parsing the package?

Mainak Ghosh
Passionate all about Technology.

Fixcrunch is a Place Where You Can Find Every Problem Solution

© Fixcrunch 2021 | Hosted By Cloudways | Security By Sucuri | CDN By BunnyCDN